Connecting the Futurist’s style and principles with Mario Schifano’s paintings, Laura Mattioli, during her talk at the Mario Schifano Study Days spoke of art dedicated to the everyday where the insular realm of the expressive and the vibrance of streets, parties, and words come together. That was during the in-person sessions on Saturday, October 23rd in the main gallery at CIMA where scholars, PhD candidates, and lovers of art spent the day learning and talking. Indeed the diversity of influence and subject matter expressed in Schifano’s art was inflected in the full range of concepts and interpretations scholars in Italy, England, and America shared during this series of discussions and lectures devoted to art of Schifano. 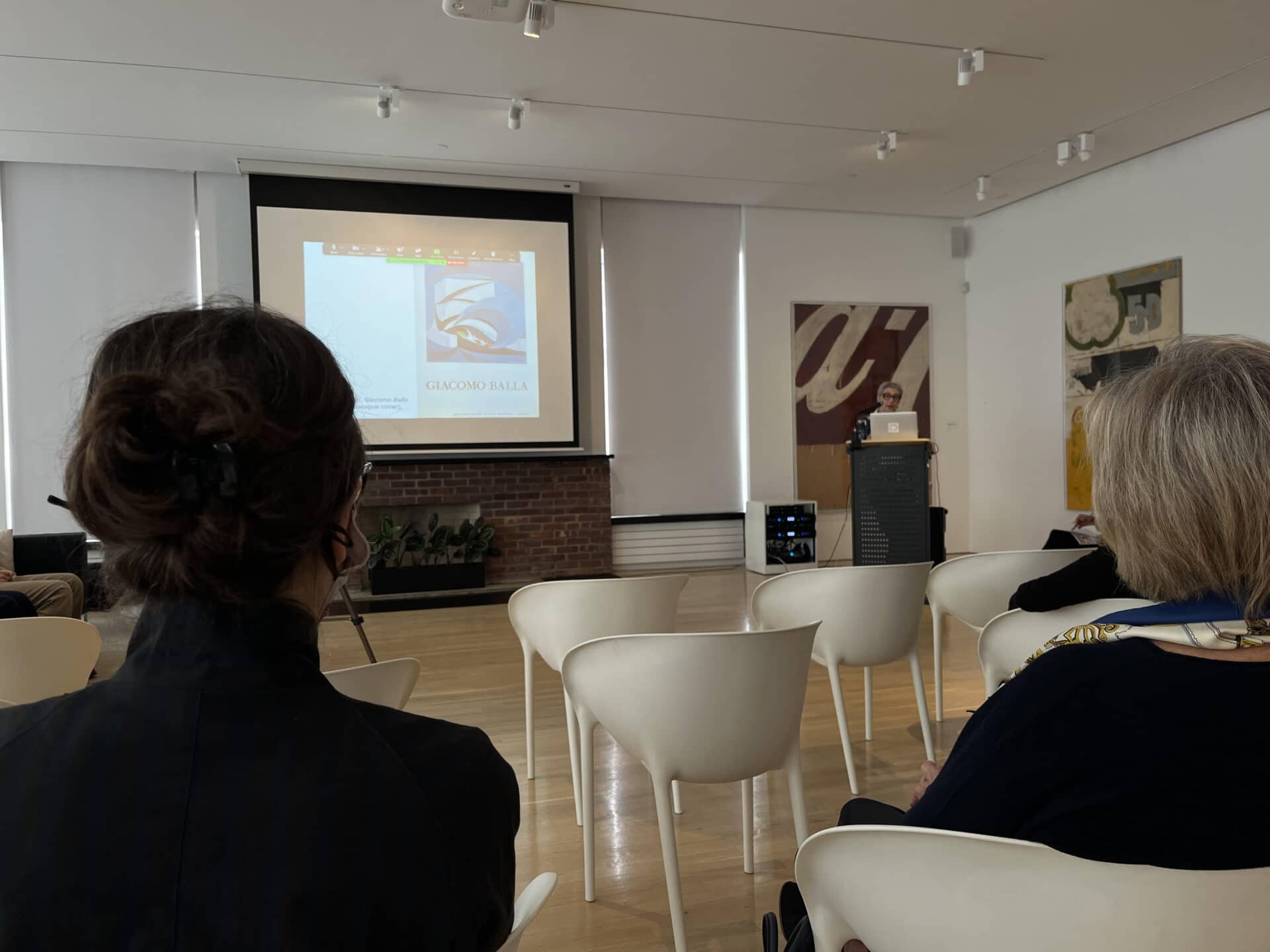 Art historian Thomas Crow’s keynote lecture, kindly recorded beforehand, recounted the full cultural and institutional context of Pop Art in New York during the 1960s. Framing the style as a global phenomenon generated not only by the well-known Americans, Andy Warhol and Roy Lichtenstein but also others from England like Richard Smith and Robyn Denny, from New Zealand like the recently deceased Billy Apple, like Oyvind Fahlstrom, a Brazilian born Swede and, of course, Mario Schifano, Crow examined the interplay of collectors, gallerists, artists, and popular culture during this vibrant decade. Exchanges between these groups within Crow’s social historical account of the style created a type of art making that, despite a popular iconography, welcomed outsiders.

Questions regarding art’s cultural and intellectual source material continued to contribute to the discussion as the lectures turned towards Schifano’s art more specifically. Speaking from the National Portrait Gallery in London, Flavia Frigeri, an art historian and curator focusing on feminism and post-war Italian art, delivered a talk concerned with television and advertising’s place in Schifano’s postmodern iconography. Continuing an exploration of influence, Paola Di Giammaria art historian and curator from Musei Vaticani in Rome located photography at the origin of a narrative concept in Schifano’s art. Closing the series of lectures on Wednesday afternoon, Giorgia Gastaldon posited that Schifano’s art constitutes a distinctly Italian approach to the style that complicates the dominant American narrative.

The in-person sessions at CIMA mentioned at the start of this post were especially inspiring for me as a student of Art History. During the pandemic many of us have become used to learning within the restricted space of a computer screen looking at paintings primarily as little digital reproductions. Listening to the speakers and looking at the works of art they described within the full space of the gallery was just wonderful. Marica Antonucci presented her paper, a result of her research as a fellow at CIMA, questioning Schifano’s relationship to Nouveau Realism through an analysis of criticisms of abstraction written by Pierre Restany, a French critic as well as Sidney Janis, an American gallerist. Flavio Fergonzi and Luca Nigro enriched this consideration of politics in Schifano’s art with a collaborative presentation on Maoist literary sources in his painting Festa cinese (1969). After everyone gathered for lunch, CIMA fellow and PhD candidate in Art History at Rice University in Houston, Texas Aja Martin reflecting on Words and Drawings, Schifano’s collaboration with American poet Frank O’Hara, advanced an ontological conception of the artist’s painting suggesting that the deflated often deformed canvases are analogous to a human body and thus connected to a fundamental experience of being. Scholar of Italian literature Alessandro Giammei, in a complex personal essay, postulated a richly phenomenological approach to painting mediated by the so-called New Material in philosophy which seeks to attend more closely to matter. The subsequent discussion between Giammei and Martin moderated by Antonucci finished the study days with comments and reflections on cultural exchange through the rich postmodern art of Schifano. 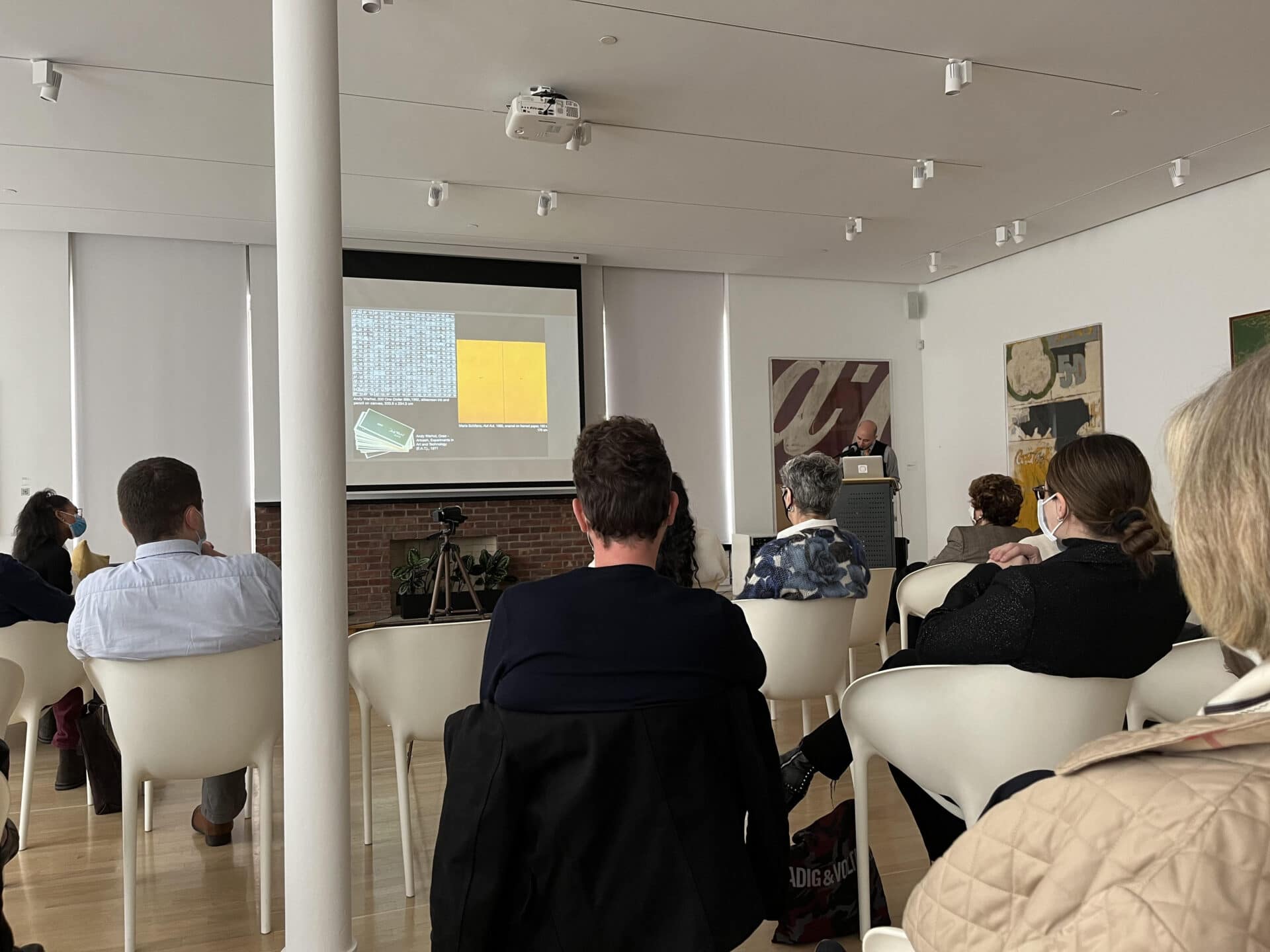 Most generally, it’s always very good to continue the mission of spreading awareness, knowledge, and appreciation of Italian Modern art that started CIMA back in 2013. Mario Schifano Study Days certainly contributed to a global conversation on Italian modern art. Personally, the close attention and careful scholarship shown by each speaker inspired me as a student of Art History to continue to dedicate myself to reading and writing within this discipline. Everyone at CIMA truly appreciates the contributions of each person who participated in this event.