This past Wednesday, October 20th, CIMA members and lovers of jazz visited the center for a live performance of classic compositions, reimagined versions of songs by The Velvet Underground and a piece by Mario Schifano’s short lived group, Le Stelle di Mario Schifano.The evening started with prosecco, appetizers, and discussion as everyone prepared for the music. Nicola Lucchi, a former CIMA Fellow and current Education and Programs Manager gave a brief introduction to the band and Jazz music’s role in Mario Schifano’s art and the songs began smoothly. The admixture of the music and the paintings in the gallery brought a deeper understanding of the compositions, titles, and concepts behind this part of the exhibition.Schifano loved jazz and referenced a number of songs in the titles of his paintings including “Somethin’ Else” and “Venus de Milo” by Miles Davis. “After Hours” and “Venus in Furs” the two songs by the Velvet Underground that Stefan Zeniuk (bass clarinet), Cody Geil (violin), and Ari Folman-Cohen (upright bass) played for everyone fit within the strange creative context Schifano was influenced by and contributed to. 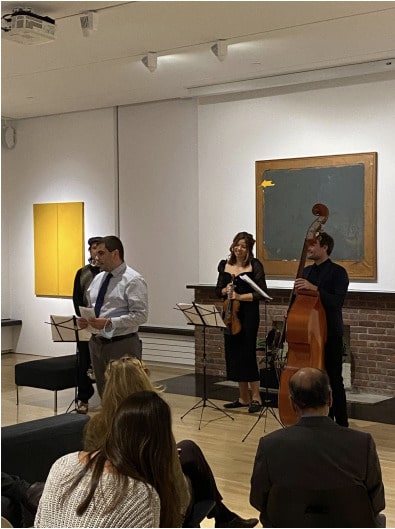 Imagine traveling from Italy to America at the start of your career and entering a world where Lou Reed and John Cale had just began to redefine rock music while Andy Warhol, Robert Rauschenberg, and Jasper Johns brought popular and refined spheres of culture to bear in layered, serial, and ironic compositions. Music coupled with Schifano’s paintings in the main gallery and the paintings by Johns, Rauschenberg, and Jim Dine several feet away from Words and Drawings, his 1964 collaboration with poet Frank O’Hara, may as well have brought the cultural context of New York during the 1960s to the present. The productive tension between Schifano’s Italian roots and his interest in American culture is one poignant theme of the exhibition. How does the artist express the creative verve of Italy while accommodating the immense experimentation of the American avant-garde of the 1960s? Where do the paintings find their cultural and social references and how are these elements articulated within the composition? During his time in New York, the paintings Venus de Milo (1961) and Something Else (1961) each express this tension and its contingencies. The title of the former recalls a classical source, the marble sculpture, probably of Aphrodite, by Alexandros of Antioch along with a contemporary genre of music, jazz. 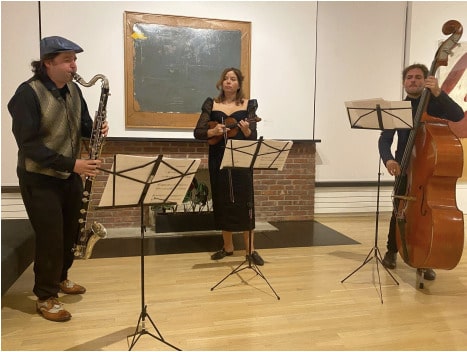 Listening to the music and looking at the paintings it was not hard to see the relationship of the music to the colors, textures, and motifs of the paintings. By extension, the qualities of jazz appear in the improvisational yet balanced composition of Tutta Propaganda (1963) or Untitled (c. 1961-62) in enamel and wax crayon completed on a page of the Jazz and Blues magazine, DownBeat in which the linearity of the notes of the score contrasts with the uneven brushstrokes of the planes Schifano painted. Form and analysis aside, everyone at CIMA is very grateful to each person who came to the concert, and we are particularly pleased that Odyssia Skouras Quadrani, Schifano’s Rome-based gallerist visited CIMA to enjoy the paintings and the music.