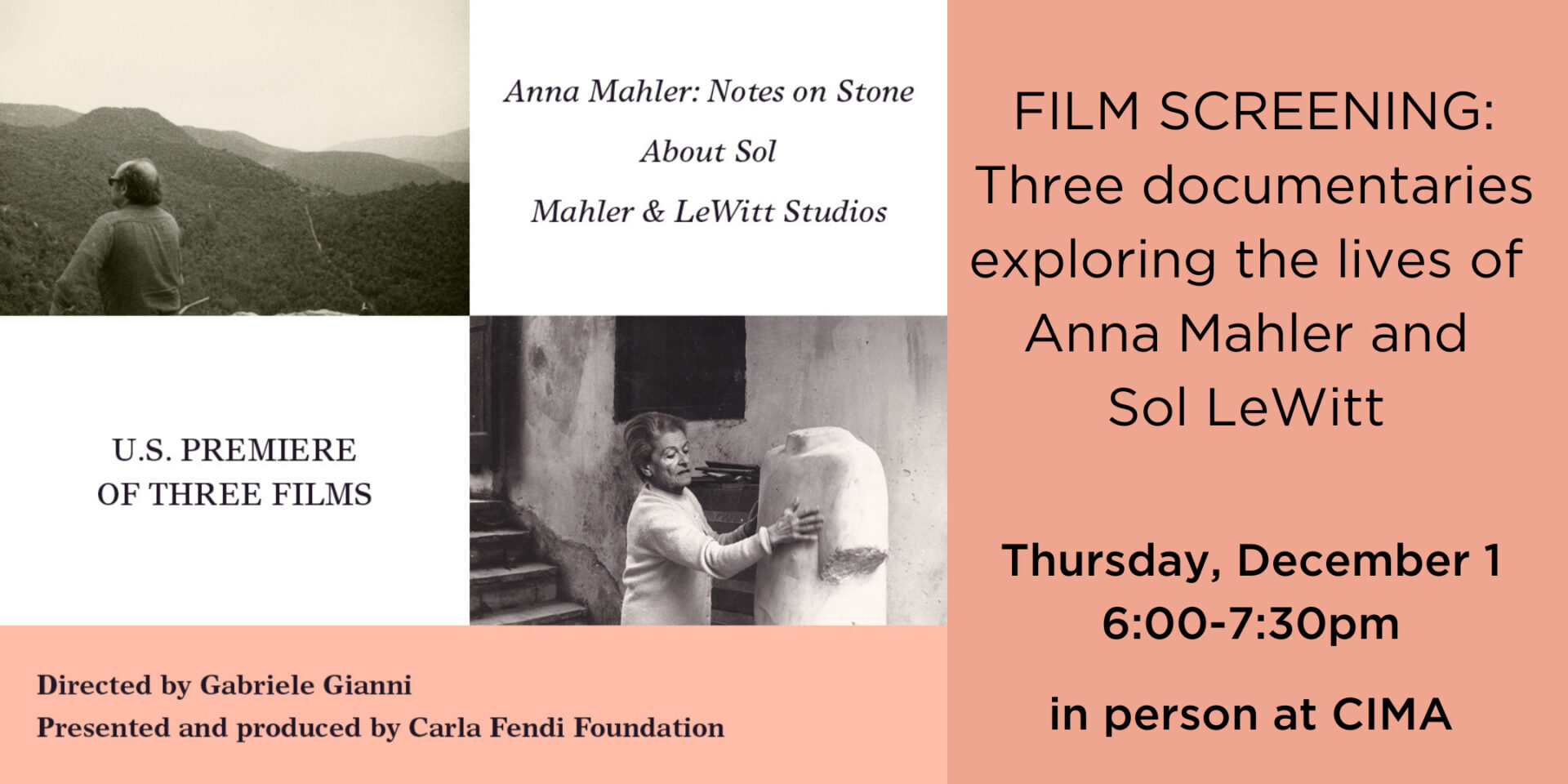 Join us for the US premiere of three recently commissioned documentaries exploring the lives of Anna Mahler and Sol LeWitt, as well as the artist residency program their work has inspired in Spoleto, Italy, at the Mahler & LeWitt Studios.

Light refreshments will be served!

Anna Mahler: Notes on Stone (23mins), narrated by her daughter Marina Mahler, is the first documentary to closely consider the life and work of stone sculptor Anna Mahler, daughter of Gustav and Alma. Before reaching Spoleto, where she would live and work from the late 1960s, the film evokes the unique cultural milieu in which she grew up – among her mentors were Oskar Kokoshka and Giorgio de Chirico. The film then follows Anna from war torn Vienna, to London and Los Angeles, where she taught at UCLA and made her most monumental work ‘The Tower of Masks’.

About Sol (23 mins) is an intimate portrait of Sol LeWitt, documenting his life and work with a particular focus on the time he spent in Spoleto. It centers on an interview with his wife Carol, who shares a string of intimate memories beginning with their departure from New York, to a new family life in Spoleto. It explores Sol’s work through his friendships with the artists and people of the town. Conversations with Adam Weinberg (Director, Whitney Museum of American Art) and Marco Tonelli (Director, Palazzo Collicola Arti Visive) explain the relevance of the great Italian painters to LeWitt’s practice – Giotto, Piero della Francesca, frà Filippo Lippi – artists who at first sight seem distant from conceptual art and minimalism.

Mahler & LeWitt Studios (12 mins) is a short film with Guy Robertson (curator and founding director, with Eva LeWitt) telling the story of the program of residencies and special projects which take place each year, for five months, around the former studios of Anna Mahler and Sol LeWitt in Spoleto. The program welcomes and provides opportunities for curators, writers and artists of all disciplines, from across the world. In Spoleto they find an ideal space to reflect and create new work.

The production of the documentary films stems from the desire of Maria Teresa Venturini Fendi, President of the Carla Fendi Foundation, to make a contribution to the important activity of the Mahler & LeWitt Studios. The films are intended to give context to the lives and work of Anna Mahler and Sol LeWitt in Spoleto, sharing their stories with new audiences, and to celebrate the significant opportunities, offered in their names, to a new generation of artists, writers and curators.

The Carla Fendi Foundation promotes and creates artistic events, restorations, social projects, science and research. Since forming in 2007, the Foundation has collaborated with the Festival dei Due Mondi, Spoleto, becoming its Main Partner in 2012. Among its projects in Spoleto, the Foundation organises the annual Premio Carla Fendi – in 2021 Marina Mahler and Carol LeWitt were recipients of the prize for their services to culture in Spoleto. They donated their prize money to the Mahler & LeWitt Studios and it will fund a series of cultural collaborations between the Carla Fendi Foundation and the studios. fondazionecarlafendi.it

Gabriele Gianni (b.1978) is an Italian director and artist. For the Carla Fendi Foundation he has also created: A Sense of Wonder, about the life of the British scientist Stephen Hawking, and Ecce Robot, on artificial intelligence, robotics, and the thinking of British scientist Alan Turing. He is co-director, with Davide Barletti, of Nothing Wrong, about the search for the meaning of Time through the stories and  eyes of three hundred children during the year of the pandemic. The film was screened at Biografilm 22, and at Annecy Cinéma Italien. In 2022 he created Reality? an augmented reality installation located in the renaissance church of Santa Maria della Manna d’Oro in Spoleto, Italy. Produced by Carla Fendi Foundation, it investigates illusory space in consciousness. gabrielegianni.com